Why Microsun Light is the Best Light for You

Watch the History of Light video above to learn more about Microsun light.

Microsun’s patented lamps produce a quality of illumination almost as natural feeling as the sun itself.  Whether you’re sewing, quilting, reading a newspaper or your favorite novel, you can enjoy vibrant and natural light all day long, all year long.

I don’t even use my overhead lights anymore! – Pat M. Brooklyn, NY

The impact of a Microsun lamp will simply transcend any expectation you’ve ever head for lighting quality.  Instead of settling for weak light to save energy, you can now choose an efficient lamp that delivers the vibrant quality of natural light that your eyes crave.

It was like sunshine just poured into my house. – Peter W. Welches, OR

When you buy a Microsun lamp, your satisfaction is guaranteed. Select a lamp style that will enhance your work or home environment, save energy, and do what you love for longer…under better, brighter Microsun light!

Microsun has over 100 different lamps styles and variations to fit any decor, all with the brilliant Microsun patented 8x brighter lighting system.

Originally customized for the Library of Congress, our brass and faux leather design is our best selling desk lamp.  Shown in black, the lamp is also available in brown faux leather or aged cherry hardwood.

Check out all of our lamp styles to find the one that best fits your needs!

Dr. Heath Gilbert is an Optometrist in Dayton, Ohio who graduated with his Doctorate in Optometry from The Ohio State University and currently practices at the Dayton Optometric Center.  He served as president of The Ohio Optometric  Association and is a Fellow of the American Academy of Optometrists (F.A.A.O.).

As we age, it is inevitable that we will experience some level of vision loss.  As an optometrist, Dr. Gilbert is very aware of the issues associated with those of us who live with vision loss. He has a Microsun lamp in his low-vision rehabilitation practice and sees his patients benefit from Microsun.  According to Dr. Gilbert, most patients who read an eye chart under a Microsun lamp  can see 1-2 lines beneath where they typically read with standard light. He also notes that people are better able to read even poorly printed materials like magazines, etc. under the clarity of Microsun light.

Watch the video above to hear Dr. Gilbert talk about age-related vision loss and Microsun light.  You can see the difference that 8x better, brighter light will make in your own home or office.  Like Dr. Gilbert’s patients, you will also enjoy the benefit of improved quality of life when you choose a Microsun lamp.

The lamp shown in the video is a  Microsun Solis with swing arm extended, allowing brilliant Microsun light to be directed downward towards your paper, book, etc. for optimal lighting efficiency.

Quilt happy with a better light

If you are involved in quilting, fabric painting, long arm quilting and you are looking for a way to reduce eye strain, get better color rendition and be able to thread a needle without a pair of readers, you will be much happier with a Microsun lamp. The Solis is one of our most popular lights for quilters, with a swing arm to help bring the light right over your work surface. The heavy base, makes sure that the lamp will not tip over. While an Ottlite may seem like a good choice, with it’s “flexible” arm, you’d need 8 Ottlites to equal the output of a single Microsun.

When it comes to any kind of crafting, Microsun will help you enjoy what you love for longer.

Don’t tattoo in the dark. Get a Microsun

Brian Brenner, owner of Truth and Triumph Tattoo in Dayton Ohio has been tattooing for a couple of decades. When you are spending hours focusing on your art, being able to see without strain is critical. After he tried the Microsun Solis task lamp, with its long swing arm, he was hooked. It’s not so much as what he sees when he’s using it, but now, when he works without it- he misses it. Now he wouldn’t work without it.

He has the optional black shade on his, you can add your own stickers. If you don’t believe Brian, try it for yourself, risk free for 30 days.

The true full spectrum light of the Microsun lamp will be like working in sunshine.

Pottery painting is easier with a Microsun lamp

At Creative Cottage Ceramics in Dayton Ohio, the serious ceramic artists gather around the Microsun Solis crafting lamp to do their painting. Its true full spectrum light eases eye strain and allows people like Sherry Kurtz to work longer and enjoy her craft.

Sherry has been painting greenware for over thirty years. Her goal is to paint her projects to look as close to real as possible. She uses a lot of dry brush technique to bring out the details and create that faux fantastic feel to her projects.

She’s using a Microsun Solis with its swing arm extended over her workspace. 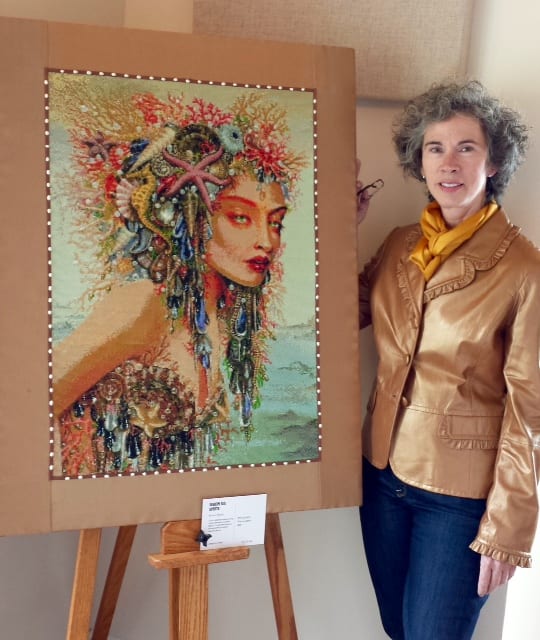 Please fill out this form to receive our most recent catalog.
0